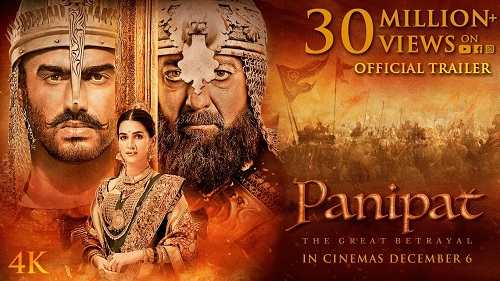 The makers of the much-anticipated historical drama, Panipat, have unveiled the character poster of Mohnish Bahl as Maratha ruler Nana Saheb Peshwa, days after the trailer release on 5 November.

Bahl sports a calm smile on his face as he sits on the throne of the Maratha empire. Lead actor Arjun Kapoor, who essays the role of Sadashiv Rao Bhau, has shared the poster on social media as well.

Mohnish made his acting debut with Maine Pyar Kiya in 1989, starring Salman Khan and Bhagyashree, in which he portrayed a negative role. He has had crucial television breakthroughs in his career when he featured in serials like Sanjivani – A Medical Boon, Kahaani Ghar Ghar Kii, Dill Mill Gayye, Kuch Toh Log Kahenge and the like. He last appeared in Jai Ho in 2014 and is presently a part of a reprised version of the serial Sanjivani.

Gowariker had confirmed the news of Aman’s cameo appearance in Panipat, in an interview with Mumbai Mirror. “Zeenat ji will be seen in a cameo as Sakina Begum, a feisty character leading her province of Hoshiyarganj. Her character lives within the confines of her kingdom, aloof from the politics of the region, till Arjun’s Sadashiv Rao Bhau turns to her for help,” he said.

Panipat will depict the story behind Third Battle of Panipat, which was fought between the Maratha Empire and the King of Afghanistan, Ahmad Shah Abdali. There were three battles of Panipat in total which shaped Mughal history and rule in the country.

Hindi litterateur, poet, and essayist Ashok Chakradhar has penned the dialogues for the film, which is being produced by Sunita Gowariker via AGPPL in association with Vision World.

The director will bring to the audience another large scale period film after Lagaan (2001) and Jodhaa Akbar (2008). Although his last film, Mohenjo Daro (2016), tanked at the box office, the expectations from Panipat already seem high.

Panipat is scheduled to hit theatres on 6 December.