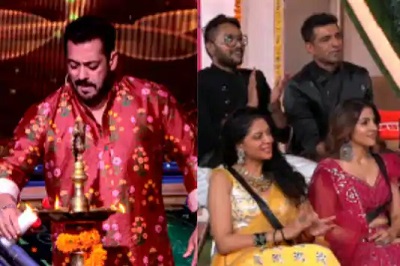 The festival of Diwali ushered in a whole lot of celebration, lights as the entertainment quotient doubled in this special Weekend Ka Vaar 9 episode. The Diwali weekend saw Bigg Boss unlocking a rare treat for contestants. On the occasion of Diwali, the contestants were given some very special gifts which were sent by their family members.

Captain Aly distributes the gifts and Rahul Vaidya was the first one to tear up when his family sends him some colorful, traditional clothes. A misty-eyed Rahul promised to celebrate the next Diwali with his Aai and Baba (mother and father). Kavita Kaushik, who was sent clothes by her father, also broke down and said that she realized the true value of family after being away from her father in the Bigg Boss House. She promised to never take her family for granted from this day forth. Rahul and Jaan, too, are seen mending their bond as Jaan promised to visit Rahul and his family once the show is done. Nikki, too, cannot hold back her emotions and said that since the past 3 years, she has not gotten a chance to celebrate Diwali with her parents. It seems this Diwali gifting made the housemates realize the true importance of family, and in a way brought them all closer together.

Salman Khan made a stylish entry in some slick and colorful traditional clothes as he takes stock of what all happened during the house in the past week. Kavita Kaushik, who was pulled up by Salman for her harsh words last week, had a lot to say about Eijaz Khan. She complained that while Eijaz always gives his bad back or a sprained leg as a reason to not do housework, he does not seem to have any issues while working out in the gym. She also accused him of repeating the same harsh words that she was pulled up for.

The show also saw a dance-off between the popular “bahus and vamps” of Indian TV. The loving bahus- Surbhi Jyoti, Mahima Makwana and the famous vamps- Sudha Chandran and Monalisa joined in the celebrations and stirred some drama inside the house with tasks. Salman added to the entertainment quotient too, in his own unique style as he shook a leg with the guests on Prem Ratan Dhan Payo. He also quoted some iconic dialogues from his films. Inside the house, Nikki Tamboli, Rubina Dilaik and Kavita Kaushik gave some incredibly entertaining dance performances.