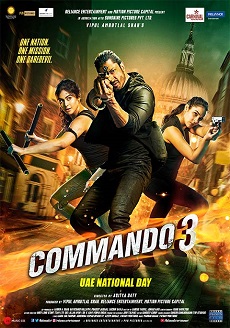 Ahead of its theatrical release, the makers of Commando 3 have released an introductory video of film’s lead Vidyut Jammwal. The five-minute footage features Jammwal as a vigilante hero rescuing schoolgirls from a bunch of eve-teasers. The scene gives a glimpse of an action-packed treat that lies ahead for the viewers.

Commando 3 producer Vipul Amrutlal Shah says it’s a bold step and a big gamble to reveal the introductory scene. “Innovation is the key to reach out today to the audience, we have decided to take a bold step to put out a 5 minute clip of the film as it is. It is a gamble but it’s our belief that after watching this clip audience will be compelled to see the film. Fingers crossed,” Shah said in a statement.

The Commando series was introduced in 2011 with Commando: A One Man Army. The second part, Commando 2: The Black Money Trail, came out in 2017.

The trailer of high-octane action drama revealed Devaiah as the antagonist of the upcoming action entertainer. Jammwal’s Karan Singh is tasked to team up with Mallika Sood (Dhar) from British Intelligence and Indian agent Bhawana Reddy (Sharama) to save the nation, and knock down Devaiah’s evil plans. The footage reveals Jammwal using his exceptional martial arts skills to beat up villains double his size, indulge in high-speed car chases, and spew out huge dose of patriot dialogues. The Indiana Pacers secured their spot in the 2016 NBA Playoffs tonight with a 129-105 thrashing of the Brooklyn Nets. Indiana’s seed is still yet to be determined, but as we’ve known for a while, they will either enter the postseason as the 7th or 8th seed in the Eastern Conference.

It’s always good to pick up a win, particularly one that clinches a playoff spot. Beyond that, however, is something gained from this that the team really needed.

The Pacers have had a number of poor performances in the latter part of the season, and part of the reason for their inconsistency has been lack of chemistry/lack of leadership. Indiana doesn’t have serious locker room issues, but they do have some that get in the way of team performance at times.

Coach Frank Vogel recently talked about the team having “decent chemistry,” which is basically an admission that it is less than optimal – or worse. After a recent blowout loss to Atlanta (pictured above), guard George Hill was quoted as saying “it’s not about keeping people happy” when asked about fixing the Pacers’ problems. His comment was an allusion to some of his teammates being a bit more concerned about themselves than the team.

The game against Brooklyn, a blowout win in which everyone got to play and contribute, helps team chemistry, at least in the short-term. These guys all feel good about things after that type of victory, coupled with the accomplishment of making the playoffs.

I don’t think it matters who they play in the first round, but what does matter is how the team learns and grows from their playoff experience. Playing either the Cavaliers or Raptors is going to be a struggle, and it will be important to see how the players react when things aren’t going well. In the NBA, that’s usually when teams pull apart, rather than band together.

The Pacers aren’t going to advance past the opening round, but if they gain some valuable playoff experience during this process, and learn to stay together and play for each other when times are tough, then they will have accomplished quite a bit during their brief playoff run.

Mumbai: A glitzy mix of Bollywood razzmatazz and high-octane performances, including that of West Indian cricketer Dwayne Bravo’s smash-hit rap ‘Champion dance’, marked a glittering opening ceremony which set the ball rolling for the ninth edition of the IPL on Friday night.

The two hour and 15 minute long event was less spectacular as compared to the previous editions but the cine stars still managed to put up an entertaining show, enthralling the gathering at the Sardar Vallabhbhai Stadium at the National Sports Club of India in Mumbai. Bollywood actors Ranveer Singh, Katrina Kaif, Jacqueline Fernandez and Punjabi rapper Yo Yo Honey Singh kept the audience glued to their seats during the opening gala attended by the BCCI top brass, franchise team owners, players and support staff of all the eight participating teams.

The crowd at the indoor stadium enjoyed every bit of Bravo’s much-anticipated ‘champions dance’. In white blazer and black trousers, Bravo, a part of the West Indies World Twenty20 winning team, swayed to his ‘Champion dance’ as the fellow cricketers and crowd cheered him.

Bravo also danced to another number ‘Chalo Chalo’ and was joined on the stage by Bollywood playback singer Ankit Tewari who sang an Indian version of ‘Champion’ — ‘Hindustan Mein Bade Bade Champion.

Like earlier opening ceremonies, the cricket segment was short and limited to only the oath taking ceremony by the skippers of the eight teams. Indian team Director Ravi Shastri ushered the eight captains to sign the MCC Spirit of Cricket pledge for fair play.