The advance bookings of Tiger Shroff and Shraddha Kapoor’s Baaghi 3 are now open and before it all goes sold out, book your tickets fast! 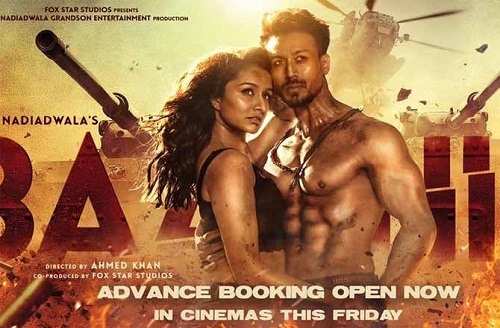 After a very long time, the advance bookings of a film have opened at least eight days before its release. Yes, we are talking about Baaghi 3, which stars Tiger Shroff, Shraddha Kapoor, and Riteish Deshmukh. Given the massive fan following of the leading man and the popularity of the franchise, the bookings had to open this early.

The Nadiadwala Grandson Twitter page has even announced that the advance bookings of the film are now open. Well, it seems this is one crazy news for all the Baaghians.

Not only that, the actors have a surprise for you all as well, which will give you an opportunity to win free movie tickets.

Given the scale on which the film is mounted on, Baaghi 3 is likely to be another juggernaut in Tiger Shroff’s repertoire. Now all eyes on March 6.

Saif Ali Khan, who was earlier approached by director Kabir Khan for a web series titled The Forgotten Army based on Subhash Chandra Bose’s Indian National Army, has now been approached by Netflix for yet another web series, reports DNA. As per another DNA. report, the Netflix web series will be based on ‘The Secret Game: A Wartime Story of Courage, Change, and Basketball’s Lost Triumph’, a sports novel by Scott Ellsworth. For the uninitiated, the novel is a written account of a secret game that was played between teams from the North Carolina College for Negros and Duke University, in 1943. The book recounts the one game that changed basketball for America and also helped usher in a new nation altogether.

The same report suggests that Khan is being considered to play coach McClendon, who originally trained the North Carolina College for Negroes’s basketball team. There is no confirmation from the streaming service or the actor yet.

However, once the finances and dates are worked out between both the parties, the director of the web series will make a formal announcement, states the same report.

Since sport will be the dominant aspect in the film, Khan will undergo strenuous physical training for the part. Khan is currently shooting for Chef, which is a remake of the much-loved Hollywood film by the same name. Chef will be in theaters on 6 October, 2017.

Some questions are truly critical. For instance: “Why did Kattappa kill Bahubali?” Now that we have the answer to that particular question, there is another burning question for the pop-culture-obsessed mind, and that question is this: Does Mohit Suri’s Half Girlfriend retain that line, immortalised by Chetan Bhagat. Deti hai toh de, varna kat le. The answer? In a bit.

First, we must address the elephant in the room. Why are people casting Arjun Kapoor in roles that demand complexity, nuance, skill and an overall understanding of context and milieu? Say what you will about Chetan Bhagat and his writing, but his books are fodder for the kind of films that can strike gold at the box office, if they’re made and positioned smartly. 3 Idiots and 2 States have proven that. In fact, Half Girlfriend — despite being a mostly-unimpressive and sometimes-revolting book — has the kind of story that would have been a smash hit as a film in the ’90s. And treated with the right amount of texture and sensitivity, it had the potential to make for an intriguing watch even for today’s audience. One of the key aspects of the story – the protagonist Madhav Jha’s struggle and conflict with the English language, can come through strongly only with a medium like cinema; because in the book, everything is in English, including the bits where the character is actually speaking in Hindi.

However, the film falls flat on its face, largely because rather than seeming like an under-confident but rugged, attractive, athletic and intelligent fellow — what Madhav is supposed to be like — Arjun’s Madhav comes across looking like an overgrown oaf (pardon my language, but it’s true). His supposed-Bihari accent is not only terrible, but also inconsistent. In one scene, he says ‘loojer’ and ‘loser’ within a few seconds of each other, without irony. (What’s surprising is that Arjun played country bumpkin so much better in his first film, Ishaqzaade.)

About the only not-bad thing one can say about Arjun Kapoor in Half Girlfriend is that the film version of Madhav Jha comes across as less of a sexist creep than the book version. But that’s because Arjun Kapoor completely lacks the chops to pull off the character the way it was written. The character in the book is your average horny Indian male bred on a staple diet of entitlement, who shows a semblance of evolution through the story. (Sample this: At one point, when the girl covers her exposed legs, Madhav in the book reacts with, ‘Damn, I just lost my view’.) The character in the film, though, is just a brawny bumbling buffoon, his facial hair standing in for actual expressions.

Mohit Suri also takes the best thing about the book — the character of Riya Somani — and makes her a brooding bore, with spurts of being a slightly improved version of the high-on-life-or-cocaine character Shraddha Kapoor played in his own Ek Villain. While she was insufferable there, she’s quite, well, sufferable here.

Riya was an enigma in the book, the reasons for her demeanour, stoic personality and her actions through the story being a mystery all through, revealed only in the third act. (Yes, the book is actually split into ‘acts’. Bhagat knew right then that he was writing a script, not a book.) Like the book, in the film the narration itself is forcibly non-linear. However, the story unfolds quite linearly, cutting to the present once in a while. The result is a dumbed-down film with virtually no peaks or hooks, preferring to spend its time wallowing in shallow emotions, accompanied by a thoroughly unmemorable soundtrack.

In fact, the ‘village area’ scene from the trailer, which has already become a mildly funny meme, actually has ‘rural area’ in the book. That’s how little the makers of the film think of or trust the audience, and that’s the level they decided they must stick to all through. In another scene, we see Shraddha Kapoor put a bottle of water to her mouth to take a sip, but clearly not sipping or even wetting her lips. That’s how little the director cares.

What we’re left with, then, is that burning question from the start of this column. (Spoiler ahead!) In the book, Madhav attempts to get intimate with Riya, is rebuffed and becomes violent, before he utters that most infamous and reviled line, which created a stir when the book came out. Deti hai toh de, varna kat le. (‘F**k me or f**k off’ is how Chetan Bhagat translates that line in the book.)

We’ll never quite know whose call it was, but the scene in the film ends up a cop-out, simply by virtue of one changed syllable. It could have played out exactly in the disgusting manner it appears in the book, after which Madhav could have gotten his comeuppance through the story. Instead, quite like the book and the film, its most (in)glorious moment is also a half-damp squib. Who would have thought that one day Chetan Bhagat will get to hear these golden words: The book was better.