From Amrita Rao’s pregnancy to Punjabi musician Sara Gurpal’s eviction from Bigg Boss 14, check out today’s latest stories from the world of entertainment. 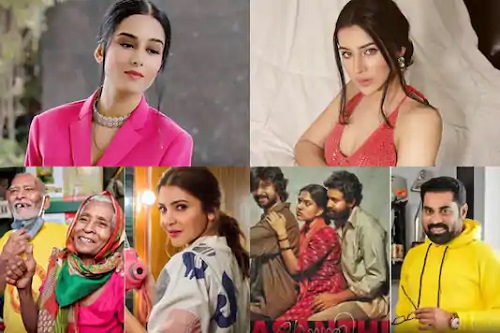 Actress Amrita Rao is expecting her first child with RJ Anmol. A picture of Amrita is doing the rounds on social media in which she puts her baby bump on display. By the looks of it, Amrita is a few months in and will soon embrace motherhood. The lovely couple was snapped outside a doctor’s clinic and Amrita made no attempts to hide the good news of her pregnancy from the media and fans.

Days after a moving video of an elderly couple from Delhi’s Malviya Nagar became a social media rage, Bollywood actress Anushka Sharma took to her Instagram stories to share a picture of them. The actress had the sweetest things to say about the old couple. Taking to her Instagram handle, Anushka shared a happy picture of the old couple from ‘Baba Ka Dhaba’ and wrote, ‘Acche vicharo ko humesha kitabi shiksha kee avashyakta nahi hoti hai (Noble thoughts do not always require bookish education)

In another news, actress Rhea Chakraborty, accused of abetting the suicide of her actor boyfriend Sushant Singh Rajput, has urged the CBI to take action against her neighbour for giving “false” statements to the media to mislead the investigation in the case.

Meanwhile, Monday’s episode of Bigg Boss 14 had an unpleasant surprise for fans of Punjabi musician Sara Gurpal, who was evicted in the show’s first-ever elimination round. Sara was nominated alongside Jaan Kumar Sanu, Eijaz Khan, Abhinav Shukla, Shehzad Deol, Nishant Singh Malkhani and Rahul Vaidya. But Bigg Boss introduced a twist and asked the ‘Seniors’ of the house – former Bigg Boss contestants Siddharth Shukla, Hina Khan and Gauahar Khan – to pick a contestant for eviction. After much deliberation, they decided to eliminate Sara.

Suraj Venjaramoodu has bagged the Best Actor award in the 50th Kerala State Film Awards. The actor has won the prestigious state award for the film Android Kunjappan Version 5.25 and Vikruthi. The Best Actress award was given to Kani Kusruti for her role in the film Biriyani. The Best Film award went to Vasanthi, directed by the Rahman brothers. The Best Director award was bagged by Lijo Jose Pellissery for Jallikattu. Fahadh Faasil and Swasika Vijay won in the Best Supporting Actors category.