Even though Varun Dhawan and Sara Ali Khan are the Gen-Y stars and fans are excited to see them in the Coolie No. 1 remake, it was Karisma Kapoor who stole the show at the film’s wrap-up party! 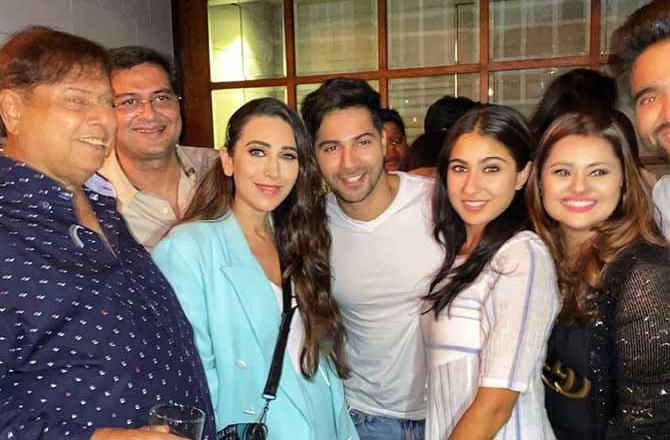 The nation seems to be excited for the new Coolie No. 1, starring Varun Dhawan and Sara Ali Khan, and directed by the man who made the original, David Dhawan. It’s all set to release on May 1, and the makers have finally completed the shoot.

And since it’s now a trend in Bollywood to celebrate a film’s completion with a lavish party, the makers of this comedy were no exceptions. And who better than the star of the original, Karisma Kapoor, to take to her Instagram account to share a fantastic picture? She shared a picture that had Varun, Sara, David, Deepshikha Deshmukh,

Coming to the inside pictures, Deshmukh took to her Instagram account also and the first inside picture was a selfie with Varun and Sara and the excitement on the faces of the actors only indicated the film is special to both of them:

In another picture, she posed with Jackky, Manish Malhotra, and Sophie Choudry with a big shooting clapboard to announce once again the film is complete:

Coming back to the film, Coolie No. 1 is arguably the funniest David Dhawan film, and it itself was a remake of the 1993 Tamil hit, Chinna Mapillai. The leading man, Govinda was at the peak of his career and his collaborations with Dhawan had just begun. The duo made 18 films together and out of them, at least 15 were smash hits. We really missed the original Coolie No. 1 at the wrap-up party.

It seems the actor isn’t on talking terms with Dhawan, after their apparent fallout. Well, Varun and Sara have a very tall order to live up to, let’s see how funny the remake is.