We are here just gushing at Shraddha Kapoor’s style file for Saaho promotions. From it scintillating silhouettes to edgy cuts, the actress is sporting them all. Made on a huge budget, Saaho is slated to be released on August 30 worldwide in Telugu, Tamil, Hindi and Malayalam. 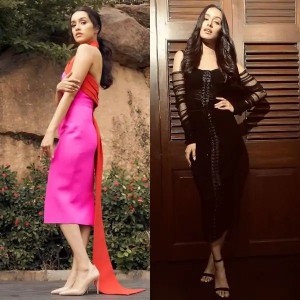 And the D-day is nearing for Prabhas’ Saaho! After the blockbuster success of Baahubali: The Conclusion, Rebel Star from the South is arriving on the silver screen after more than two years with the multi-lingual quintessential venture and fans couldn’t be more thrilled. Seemingly, Saaho has it all – action, thrills, high-octane chase sequences. That and a sparkling chemistry between Prabhas and Shraddha Kapoor who will be seen opposite the superstar in the film. If the trailer and songs are any proof, the pair is going to light up the big screens with their on-screen partnership.

But while there is some time before that happens, we are here just gushing at Shraddha Kapoor’s style file for Saaho promotions. From scintillating silhouettes to edgy cuts, the actress is sporting them all. Don’t believe us? Check it out here.

See what we see? The film also marks the Telugu debut of Shraddha who found learning a new language, both challenging and exciting. She had said, “Speaking a language I didn’t know was tough but doable. But there were nights when I’d be awake, learning my lines, understanding what I was saying and then sitting with Sujeeth (director) to rehearse them before a shot. A coach also came home to help me get the dialect right.”