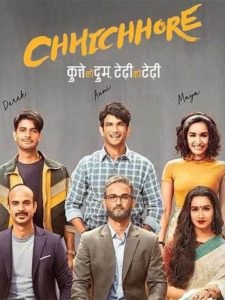 Chhichhore is turning out to be one of the biggest hits of the year. It has already grossed more than Rs 100 crore at the domestic box office. The audience just cannot get enough of the film that stars Sushant Singh Rajput, Shraddha Kapoor, Naveen Polishetty, Tahir Raj Bhasin, Prateik, Varun Sharma, Saharsh Kumar Shukla and Tushar Pandey in lead roles. BollywoodLife spoke to Tushar Pandey who played Mummy in the film. Describing what he loved about his character, Tushar said, “I feel Mummy had one of the best arcs in the film. He was the middle-class guy studying engineering in the hope of a better future. Mummy had that aspirational quality that everyone could relate to. And his character was the only one with reference to a family except Sexa’s (Varun Sharma) whose dad comes to the hostel for a while. Everyone has loved the film and my character too. The maximum compliments I am getting is for the scene where I tell my kid that I love him irrespective of how he fares in his exams.

The film is being watched repeatedly by the audience in the theatres. In fact, some are even demanding sequels and spin-offs of the characters. So, has the team discussed a sequel or spin-off? “I have not heard of anything of that sort yet. But the idea is not a bad one (laughs). It would be fun to have a spin-off on Mummy and the guys (laughs out aloud). If something of that happens, I am sure Nitesh Sir will inform us.” says Tushar.

Tushar is a trained actor and worked meticulously on his character for the film. “The tricky part was the older characters. I put in prep for a couple of months before the shoot to get it right. Nitesh Sir is all for preparations, so we sat down and discussed stuff. I have a theatre background so I enjoy this process immensely,” states Tushar. The young actor says how everyone was equal on the sets. “Not once did Shraddha Kapoor or Sushant Singh Rajput behave like they were ‘stars’ of the film. The writing was clear, it was about all the characters. We achieved so much organic chemistry as we were on the same page,” says Tushar.

The film has made Rs 150 crore at the global box-office and is a huge hit for Nadiadwala Grandson. We truly hope that they think of a sequel or spin-off with the loveable characters!