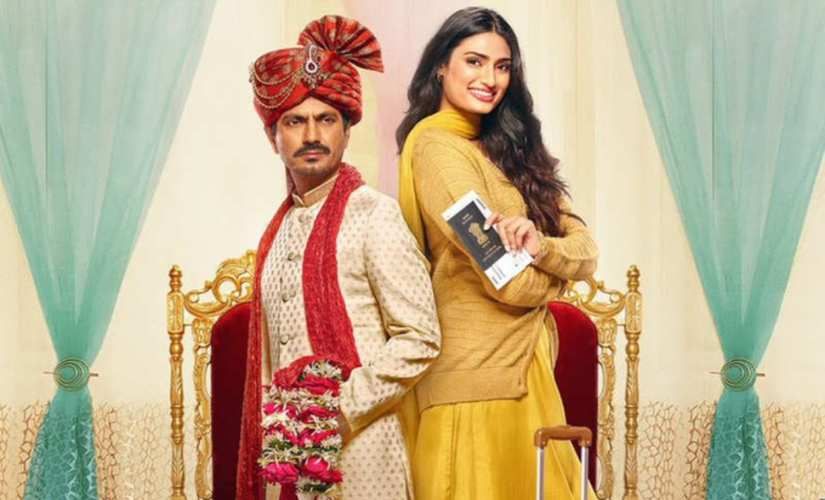 Nawazuddin Siddiqui may be best known for his dark and gritty cinema but the actor is partial to romantic comedies. Hence, he was happy to be offered Motichoor Chaknachoor – probably his first out-and-out lighthearted romcom that hit the screens on 15 November.

“I have done many comedies when I was doing theatre but I didn’t get the chance to do comedies in films maybe because of my intense looks. But I enjoy comedies because you don’t have to think or stress too much in these films like I have to do for my serious roles. I liked the title itself and then I read the script, had a narration and I agreed to do the film immediately. At that time I was doing an intense role for Sacred Games, so I needed to do a light film and I had lot of fun doing Motichoor,” says Siddiqui.

I quite liked my character. I play this 36-year-old guy who is desperate to get married, so much so, that he is fine to marry any girl. Then there is the female protagonist who wants to marry only an NRI so that her social media status looks impressive. So, the first half the situation can be called motichoor and the second half it becomes chaknachoor,” he laughs heartily.

Siddiqui is all praise for his co-star Athiya Shetty, her third film after 2015’s Hero, and Mubarakan with Arjun Kapoor. “Motichoor is her best work so far. For a comedy to work, it is important to have that give and take with your co-star and Athiya was very good at that. She is very professional. She had prepared herself so well and her dialect and accent was perfect,” says the critically-acclaimed award winning actor.

“Comedy is a difficult genre because it is all about timing and it is most important to have that chemistry with your co-star. I believe that less is more in comedy. You don’t have to be so out there and exaggerated. You have to be true to your character and honesty in every emotion is most important,” says Shetty.

On one hand the budding actress wanted to challenge herself in her third outing and on the other, she wondered how she would pull it off with Siddiqui opposite her. “After Mubarakan I wanted to step out of my comfort zone,” she explains.

“I wanted to do something very different. I feel you have to break your own mould, take the risk and that leap of faith. I was extremely excited but at the same time I was very intimidated and nervous. But it was a great opportunity to work with the brilliant actor like him. It kept me on my toes to work even harder. I didn’t want to look like a newcomer. I was also getting the chance of doing the workshop and prep for the role. It is so important these days to prep up as it helps in getting into the skin of the character, and if you have prepped enough then half your battle is won because then you can experiment, be far more creative and have fun playing your part.”

For Siddiqui, the fun element in Motichoor Chaknachoor was how he could relate to several characters in his onscreen family. “There are two families and we see these kind of characters around us in our daily life. There is a mausi, a dadi, chachi, brother, sister…and each have a different take on the girl my character should marry. Then, can my mother be called greedy or not as she has her own selfish reasons for her son’s marriage and for him to continue working in Dubai. You can identify with all these characters,” says Siddiqui.

Improvisation is key for Siddiqui, when it comes to comedy. “I do improvise a lot which is the best thing about a comedy. You can’t do that in something like Sacred Games where the language is very different. If a thought suddenly occurs you can just say it in a comedy and there was a lot of scope to improvise in Motichoor just that I was careful about the choice of words and that it shouldn’t sound silly and forced,” he says.

“Nawaz was busy and he couldn’t attend the workshop. I met him straight on set and we started shooting immediately. I like the fact that we didn’t do any workshop together because then I could meet him while he was already in his character which was very organic,” says Shetty, who particularly liked the journey of her character.

“I play a very stubborn girl and the only aspiration in her life is that her marriage should take her abroad. But what I love about the character is her journey and the stark difference in the second half as compared to the first. How a situation helps her grow and become a better person, so there is an emotional graph. There were some scenes that were emotionally demanding. But once you are prepared then you can play around and have the liberty to play the character in different ways. Besides, I could relate to the fact that she is ambitious, independent and has a mind of her own,” she adds.

Siddiqui has had four to five releases (so far) but what disappointed him the most was the debacle of Photograph and poor response to Sacred Games 2. “Sacred Games 2 was criticised probably because of some of the lengthy characters that were introduced and looks like those didn’t work with the audience. Then, there was also lot of philosophy which must have become boring. Also, people could have missed the characters they had got associated with in the first season. But for me performance-wise the second season was much more difficult,” he says.

Siddiqui will next play a grey character in Sudhir Mishra’s for Netflix adaptation of journalist-novelist Manu Joseph’s book Serious Men. There is also Bangladeshi filmmaker Mostofa Sarwar Farooki’s’ No Land’s Man, which will be shot in New York, Sydney, Bangladesh and India. Siddiqui says that the script explores today’s strange world, with strong humor, satire, and emotion. “Every year I want to do two films as per my liking and choice. These can be the so called art and festival films. Then I want to do two films as per the market and box office demand and I would prefer these to be romantic. But I also want to do more in-depth roles, dark films and experiment more and more,” he says.

However, Siddiqui is happy about the fact that the filmmakers in Bollywood have continued to trust him with masala entertainers. “I am doing films of every genre. It is good that an actor like me is even being offered a Housefull 4 just for a song and an item number. It is like an experiment for me. What else do I want? Sajid (Nadiadwala, producer) called me and I went and did the song in four days and came back. The roles in mainstream films are also interesting enough and fun and it isn’t easy at all. I had to seriously practise this kind of dance (Housefull 4) it wasn’t easy,” he says.

Meanwhile, Shetty, who is longing to doing a dark and intense thriller, is likely to soon announce a project she says is “novel” and “different”. The actress believes in patiently waiting for good roles to come her way. “There are good days and there are bad days. Some days it really gets frustrating. You don’t know what is going to happen next and there is lot of unpredictability but that is the part and parcel of this profession. It is as important as doing films that challenge you, motivates you and makes you happy,” she says.

“It doesn’t make any difference whether you are a star-kid or not. These kind of pressures crop up for any actor. There is always a kind of pressure to achieve, to continue to be successful, or to become successful. I am sure the actors who are at the top have the pressure to sustain. Pressure is inevitable,” adds Shetty, who had once said that she’s learning from her father’s (Suniel Shetty) mistakes. “Well, you can’t pick up from other’s learning but you can always be cautious and be aware. I have seen my dad’s highs and lows, so I have observed and learnt from that. He is my biggest critic and I take his opinion very seriously but the decision ultimately is my own because I have to dedicate my time, effort and energy into something that makes me happy.