A study of Bollywood’s Commando series could be the basis for a PhD in opportunism. Commando: A One Man Army, released in 2013, was about a loyal Armyman being abandoned by the Indian government when he is caught in enemy territory. Off screen, India got a new government in 2014 and with it arrived the Hindi film industry’s open subservience to the establishment. So Commando 2: The Black Money Trail in 2017 batted for demonetisation. And now, as Islamophobia rages across India, here comes Commando 3 with its cringe-worthy condescension towards India’s Muslims.

The third instalment of Commando, this one too starring Vidyut Jammwal, is directed by Aditya Datt whose best-known feature so far is the Emraan Hashmi-Tanushree Dutta-starrer Aashiq Banaya Aapne. Jammwal’s Karan Singh Dogra this time is on a mission to track down a London-based terrorist running a conversion racket in India that draws innocent Hindu boys to the Islamic fold and brainwashes them into committing violence for Allah along with other Muslims. Buraq Ansari (Gulshan Devaiah) is as evil as a human can be. We first see him heavily veiled. His face is revealed in a scene in which he forces his little son to watch as he brutally murders a man. 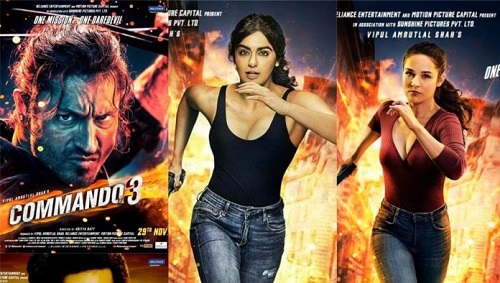 Working alongside Karan is his sidekick Bhavna Reddy played, as she was earlier, by Adah Sharma. The mix this time is sought to be revved up by the addition of the British Intelligence agent Mallika Sood (Angira Dhar) who is based on the same prototype that has yielded the Bond franchise’s ‘Bond girl’.

The women in Commando 3 are occasionally given space to display their fighting skills and in that limited time Sharma and Dhar show us how immensely capable they are, but make no mistake about this: the primary purpose of their existence in this screenplay is to compete for Karan’s attention so that while he goes about the serious business of saving the country, we never forget that he leaves la femmes weak at the knees.

The subordination of women to the hero in Commando 3 is nothing compared to the film’s messaging about Muslims. The problem is not with the depiction of a terror network operating in the name of Islam — that such organisations exist must of course be acknowledged; the problem lies with the manner in which this film seeks to hold all Indian Muslims accountable for Buraq Ansari’s actions in a way that the public discourse has never held India’s entire majority community accountable for the wrongdoings of individual members.

Commando 3 is strategic while building its case. It is careful to prepare alibis for itself even as it lectures India’s Muslims about their duty towards the nation at large and their Hindu brethren in particular.

For instance, mention is made of beef-related lynchings and other genuine grievances of the Muslim community, which can be held up to anyone who accuses the film of being one-sided. Here’s the catch though: if majoritarian fundamentalists object to the acknowledgement of these crimes by their group, the defence is no doubt a scene right at the start where a Muslim terrorist was shown instigating his flunkeys to kill a calf to stir up trouble. The insinuation is that even the lynchings of Muslims have been the fault of Muslims.

While the principal evil Muslim in Commando 3 spends his time plotting against Hindus, the good Hindu hero waits for a Muslim terrorist to finish his namaz before capturing him. Oh look ye, respect!

(Minor spoilers in the next two sentences) The sermonising directed at Muslims peaks in a video appeal Karan publishes, aimed at inspiring the Muslim masses to thwart Buraq’s plan to attack the Hindu masses. The video and the subsequent scenes of Muslims rising up in response are dripping with a patronising attitude. (Spoiler alert ends) They are also amateurishly written and in your face, epitomised by that shot before the credits roll of a Hindu man and a Muslim man standing shoulder to shoulder right after they together fire a flaming arrow at an effigy of Ravan.

Those who wish to understand the difference between the mischief-mongering by Commando 3 and a factual portrayal of Islamic terrorism would be well advised to watch Anubhav Sinha’s Hindi film Mulk (2018) .

Commando 3’s minuses don’t end with its troubling politics. The Indian agents in London come up trumps despite being dumb, lax, over-confident and foolhardy, because these qualities are what the writing team perceives as bravery. (Some people may deem the next sentence a spoiler) For instance, both Bhavna and Karan, despite being undercover agents, blow their own cover early in the narrative to draw the snake out of his hole: she tweets about Karan from her actual ID and he releases a video to the media revealing his identity, both of which are somehow meant to be clever moves. (Spoiler alert ends)

Jammwal, Sharma and Dhar do what is required of them well enough: she and she scrap over him, all three beat up people, they glare, they stare. I experienced a little heartache though at the sight of a fine actor like Gulshan Devaiah reduced to over-acting as Buraq Ansari.

Commando 3 is technically glossy and the fight choreography is slick. The writing though is contrived. The film is filled with lines like this one tossed at Buraq by Karan, “Pehle purdon mein chhupa karta thha, ab mardon mein?” (Earlier you hid behind a veil, now you hide behind men?) as the latter walks towards him surrounded by armed guards, but the dialoguebaazi is tiresome and soulless. Even if this were not the case, it is appalling that the populist stereotypes in the script target an already vulnerable people.

It becomes evident in the end though that none of this comes from a place of conviction. So unsure of itself is Commando 3, that after all its bloodshed and bhashans the end credits run alongside not one but two formulaic song and dance routines.

As if that is not ludicrous enough, there follows Karan dancing with the two women in skimpy, sexy attire, ending on an image of him in silhouette with a Ravan in the background.