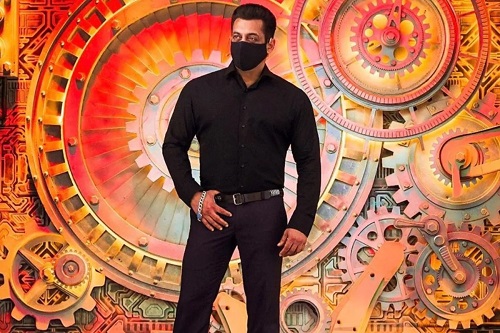 Bigg Boss 14 is all set to start the entertainment tonight. The host of the show will unveil the contestants of the show today at 9 pm on Colors Tv. It’s been a decade since the Bollywood actor is gracing the show with his charm and swag. He has been ruling the heart with his inimitable style.

While in the promos of the BB14 Salman can be seen donning in a blue suit over a black shirt, let’s go down the memory lane and have a look at his style statements over the years.

Bigg Boss 13- Salman Khan made a grand entry in a formal ensemble. He wore a quintessential suit with a blue pocket square.

Bigg Boss 12- The Bollywood actor sported in a French-cut beard and moustache look. He was seen in a mix-match look with the bright jackets and some bright shirts.

Bigg Boss 11- Salman’s look in this season gained much love from the audience. He was sported in textured jackets with brooches and pocket squares.

Bigg Boss 10- Bigg Boss 10 was the first season where commoners have also entered the show. In this season, Salman opted for vibrant looks with a variety of jackets like printed, colourful, embroidered and velvet.

Bigg Boss 9- Salman entered the Bigg Boss 9 stage in a crew-cut hair and his basic rustic looks. On the premiere night, he was seen in a shimmery suit over black shirt and trousers.

Bigg Boss 8- Salman with his uniform look left his fans dumbstruck. He was seen dressed up in the uniform of a pilot in the premiere episode.

Bigg Boss 7- This season had the theme of Angel and devil with the tagline – Jannat Ka Wow Aur Jahannum Ka Ou. Salman was seen sporting dark colours in this season.

Bigg Boss 6- Salman set the Bigg Boss 6 stage on fire in a three-piece suit and a clean look. His metal brooches were centre of attraction.

Bigg Boss 5- This season had two hosts as Salman was seen sharing the stage with Sanjay Dutt. The actor was seen in a velvet jacket over a bright coloured party shirt and a ripped pair of denim.

Bigg Boss 4- This season marked the Salman Khan’s debut on Bigg Boss. The actor opted a rockstar look in a sequinned jacket over a printed tee and colourful bandana.

India is not the only country where justice is more inclined to give celebrities the benefit of the doubt.

Take OJ Simpson in the US and the travesty that was his trial. The Oscar Pistorious brouhaha that really won’t in the end translate into a long term sentence in South Africa. On a less bloody level, soccer maestro escaping the tax fraud charge. Will New England Patriots player Aaron Hernandez be found guilty of first-degree murder of football player Odin Lloyd, who was shot in cold blood? It is a long list.

Whether Salman Khan will now have to trot back to court to face the sharp antlers of justice over a black buck shooting is to be seen. That the buck would have dead of old age might be a mitigating factor.

By the same token some celebrities are pilloried just because they are celebrities.Small town courts summon well-known individuals to their courts on the flimsiest of reasons, and that brings me to a good man’s son.

The news that Sanjay Dutt will be finally released from Yerawada jail and inhale freedom is scarcely earth shattering seeing how often he was given whiffs of it. But it will write the final paragraph in one of the oddest sentencings in India’s modern penal history. In 1993 when he was arrested the public attitude was ambivalent. If one recalls, the nexus between organised criminal syndicates and Bollywood was a sort of unspoken given and stars were feted and spoilt. Whatever they wanted they got, including weapons and other sundry goodies if they would only sign the dotted line. It was party time.

After he was arrested for being a recipient of a cache of arms used by the Mumbai blast terrorists, much of the sympathy for him dried up but after an 18-month stay as a guest of the government he was released and it was over a decade later that his case came up for trial. By then interest in the Dutt indiscretion or complicity had dwindled and it looked a lot more like railroading the guy to start the whole rigmarole again. He had done 18 months for an act of foolish arrogance. Also, it wasn’t as if he had killed anyone directly or gone on a drunken drive and there were now other stars competing for legal indictments.

So, when he did get sent to jail for five years the sympathy frothed again and the general feeling was it was excessive; though some did feel that he asked for it and should pay.

Once in prison the system bent over backwards in his favour to get him paroled on several occasions. It kind of became a harsh joke that he was more in than out of prison and in the two years has been allowed out for over five months. In August this year he was given a month off to attend to his daughter’s nasal surgery which underscored just how casual the incarceration was.

This light-hearted, almost comical fashion in which Dutt was frequently given a free pass contrasted dramatically in a nation where 300,000 undertrials take longer than his sentence to get their day (or at least some minutes in court) and simply languish in jail with none to do them any reverence. Family members can die, fall seriously ill, makes no difference, they do not get furloughs. In fact there are over 2,000 children born behind bars whose mothers are still awaiting trial. These kids don’t know what freedom is. Some statistics indicate that three of four prisoners are undertrials.

Against this backdrop, the generous and gracious breaks in Sanjay Dutt’s incarceration began to annoy public sensibilities. Either let the guy go or, if he was part of the horrendous 1993 attacks, then let him serve his sentence and stop with the courtesies. Obviously he was not a risk to the nation, his crime could not have been so heinous, and was the cause of justice really being served? He had been mentally raked for 13 years and a life sentence is 14 years long.

Nothing changed despite the ‘for’ and ‘against’ lobbies. Every now and again Dutt romped home and a few NGOs and other watchdog groups made a song and dance but the system was well inclined to give him a helping hand and it did, thereby diluting the seriousness of the charges and the propriety of such a severe sentence if it was being carried out with such a happy abandon that even a nasal surgery called for an immediate release…not quite a pressing situation for a ‘terrorist’ ally to push off.

Come September and Dutt was disallowed an extension of another 30 days in what was a muscular show of strength and presumed impartiality by the judicial authorities. Look, we treat everyone equally.

The end is now in sight and come February 25, Dutt, all of 18 kilos lighter, will finally get a one way ticket to freedom and the most tawdry case that spanned 22 years will have come to an end. That extraordinary length in itself is enough to call it a day and let the man go. He has paid his dues and then some.

Even waiting till February seems utterly pointless. Let him rejoin his family for new year’s.